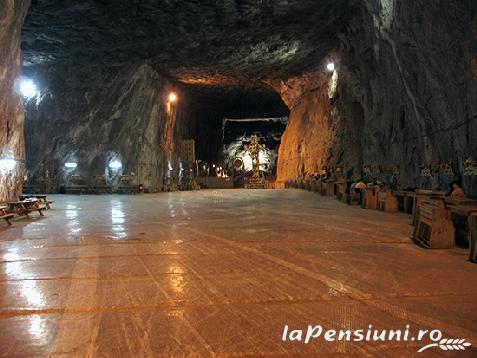 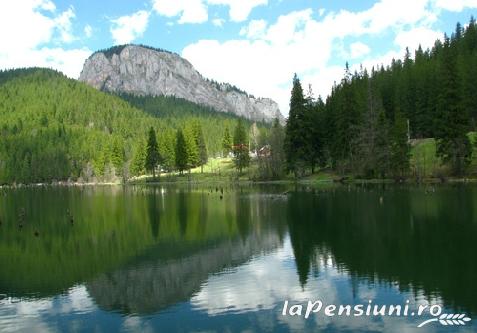 The Franciscan Monastery of Sumuleu Ciuc - the Church, is made in Baroque style and has one of the largest organs of Romania. Next to it is a baroque altar and a statue of the Virgin Mary with the Child . It is the place of pilgrimage where hundreds of thousands of Roman Catholic believers gather annually

Harghita Baths, part of Miercurea Ciuc, is a mountain resort, mountain, being the most visited for its ski slopes. The average altitude of the locality is 1300-1400 m. The average skiing season is 4 months and the average snow cover exceeds 60 cm. The resort has several slopes, equipped with teleferic, some even with nocturnal installations.

Lake St. Ana , is the only volcanic lake in Romania. The lake is located at the bottom of the crater of an extinct volcano, called Ciomatu Mare , from the Puciosu volcanic massif, the site of the most recent volcanic eruption in the Carpathians and Eastern Europe, which took place several tens of thousands of years ago 42,000 years). St. Ana's Hill is at an altitude of 946 m with a maximum depth of 7 m. The lake complements its waters only from rainfall, with no springs. The purity of water approaches that of distilled water, with only 0.0029 ml of minerals.

Tinos Moho? , translated from the Hungarian language "Lake with musk", is a swamp formed in one of the two volcanic craters in the Harghita Mountains. The crater where the tin is now burst first, and then it was filled with water. When the second crater erupted (where St. Ana's Lake was formed), the ashes reached Lake Moho?. Over time the area was covered with peat moss, and only a few water holes remained in the lake.

Salina Praid
Situated at 10 km from the Sovata resort in Harghita County, Praid Salt is one of the largest salt mines in the country and Europe, exploiting it for hundreds of years the source of income for the locals, many of them now working in the salt mine.

the Red lake
It is the largest natural mountain lake in Romania. It was formed by the collapse of a flank of Mount Ghilcos. His name comes from the Red Para that crosses red layers with oxides and iron hydroxides.