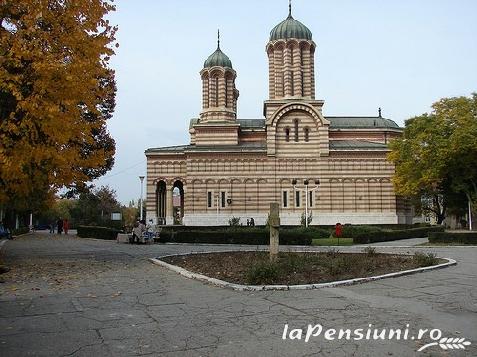 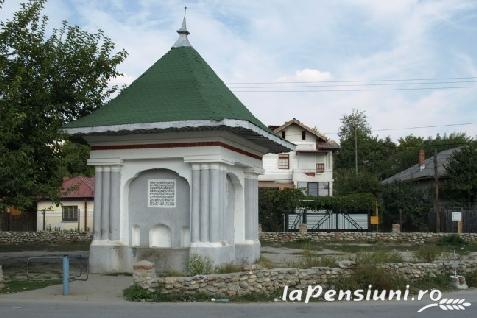 Royal Church "Saint Dumitru" - This is a church built by Matei Basarab and dates from the period 1651-1652, is built on an older place. Church building was made after a Greek cross-shaped plan, with an open porch, a tower on the nave and two narthex. He suffered great damage after the earthquake of 11 January 1838, was rebuilt between 1885 -1889 by French architect Emile Lacomte of Nouy. In 1906 and 1933 was restored, everything then being executed murals and interior by French painters and Bories Menipot. Currently, the Metropolitan Cathedral of Oltenia, here are deposited the relics of Holy Martyrs Tatiana.

Bani-house was built in 1699 at the initiative of Prince Constantin Brancoveanu and is the oldest civil building in the city and one of the oldest architectural monuments of its kind in the country. The construction of this monument was made on the site of a old building (dating from the XVth century), which belonged to noble families Craiove?ti sea. In 1750, this worked first Romanian school in Craiova. Currently houses the Museum of Ethnography and Folk Art.

Popova-Fountain fountain was built in 1613 after a square plan, each side one has a niche, and the sides of S and V were performed two inscriptions, one with and one Latin letters with Cyrillic letters. In 1651 was attributed to Matthew Basarab, the remaking it, where is also called the "Fountain Basarabestilor".

Monastery Bucovat-A was built between 1506-1512 and was then rebuilt in 1571-1572 by Stefan and his son Parvu money and painted in 1574. The monastery church is dedicated to "St. Nicholas" was devastated in 1781 and demolished in 1834 Jiu bell waters. Monastery building was made of brick and has a trefoil and a heptagon altar. On 11 January 1838, fell into ruin because of an earthquake, was rebuilt later. It was restored and re-established the monastery, after World War I by the commission of Historical Monuments. Currently working in the monastery of the Archdiocese of Craiova Theological Seminary.

Park Romanescu-made by French architect E. Redont, between 1900 -1903, is one of the largest and most beautiful parks in the country (covers approx. 90 ha.). Here were built greenhouses, a lake with islands, statues, wildlife and a superb cold suspension bridge.

Ornithological reserve, located in the Community Ciupercenii We, in Dolj county, this reserve is the only place in the Danube has remained neindiguit. Is a significant nesting place for various species of birds such as Little Egret (Egretta garzetta), heron (Ardea purpurea), black stork (Ciconia nigra), corcodelul great (Podiceps cristatus), the rate of motley (Anas strepera), etc. .

Wellness and fitness:
Attractions and activities in the surrounding area:
Contact
Back to