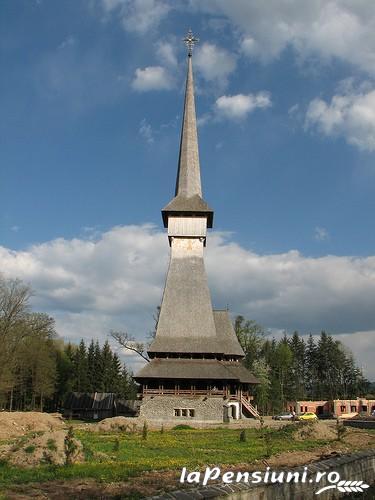 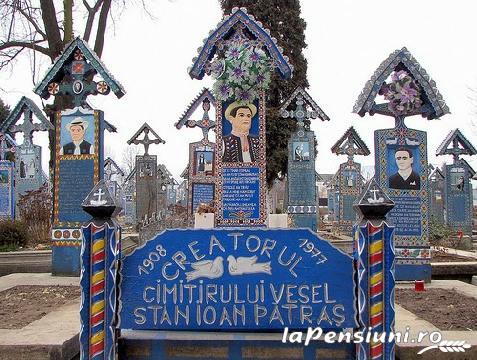 Peri Monastery is located near the village Sapanta. It is a traditional monastery, founded in the days of princes Dragosesti on an old hermits wearing Arghanghel dedicated to Saint Michael.

Voivod Balcu and then drag (grandchildren Dragos Voda) have given this monastery land and property so that in 1391 was built a stone church. It is elevated to Stavropegic Patriarchal with jurisdiction over churches in eight lands and for 312 years there has been headquartered Romanian Orthodox Diocese of Maramures. During this period Sapanta-Peri served as the residence of many bishops including Iosif Stoica, later canonized by the Holy Synod in 1992 named St. Iosif Marturisitorul in Maramures commemorated on 24 April.


Merry Cemetery -is considered a true open-air museum. Set in the village, the parish church, the museum contains over eight monuments of folk art. Created in 1935, it became unique due artisan Ioan Stan Patras.

Since 1934, the master has put many an epitaph on the tomb crosses, a short poem written in the first person, slightly ironic, giving new meaning to death. Each cross is a representation made in vivid colors, which narrates the life of the late and even cause death. The creator of this cemetery had humor to compose your own epitaph and carve and paint the cross that marks his grave now.

Currently, crosses are made by Ion Stan Patras descendants master. Over those 70 years, the cemetery gathered over 800 painted crosses.


House Mesterului- more precisely, it is the memorial house of Stan Ioan Patras - a building located about 200 m from the Merry Cemetery, on a side street.

It consists of a house with two rooms and a courtyard in which painting and sculpture workshop of master, and crosses made of it.

Inside the museum you can admire the costumes of the region Sapanta, handicrafts (rugs, carpets, pottery, icons, wood cabinet, made by Ioan Stan Patras) and pictures of the family.