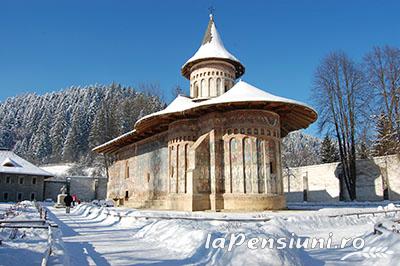 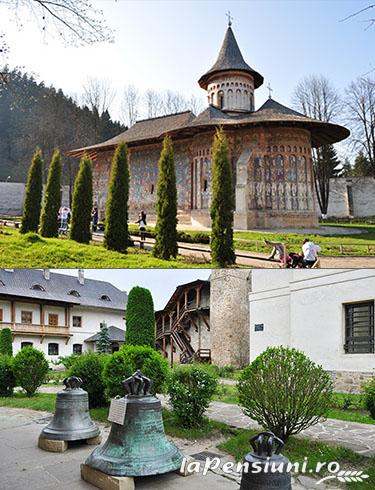 Monasteries from Bucovina - Near the town of Vatra Dornei there are a series of Orthodox monasteries that impress both by their antiquity and by their architecture. Among these we enumerate: PIATRA TAIETURII Monastery, MESTECANIS Hermitage, PODU COSNEI Hermitage, ?Monastery of the Mother of God? Monastery Monastery and of course a few km from Vatra Dornei: PUTNA, SUCEVITA (1581 - 1601), MOLDOVITA (1532), VORONET , HUMOR (1530), & c. All these monasteries are unique monuments of Romanian feudal art, with murals both inside and outside.


The park in the center of the resort, famous for the squirrels that live there, and for the concerts held in the summer season
"Lunca Dornei" Park - currently being developed
The skating rink in Vatra Dornei Park
Riding center at the base of the Park Part
SF CATHEDRAL. TRINITY
DRACULA Castle - It is located in Piatra Fantanele commune, through the Tihuta pass 40 km from Vatra Dornei and is a special medieval construction, and of course it is said that Count Dracula lived here, in this sense you can visit the crypt where his remains are. as well as some personal things. You can dine in the castle restaurant, having the opportunity to taste some of the best and original dishes in the area.
Peat bog from Poiana Stampei
Zugrenilor Quay
Mountain trails in the Dornelor Area (Calimani Mountains, Rarau, Giumalau, Bistritei, Suhard, Ousorul Peak)
The Calimani Mountains occupy the northwestern part of the central group of the Eastern Carpathians, representing the largest volcanic massif in Romania. It runs in a north-west-south-east direction, being delimited to the north by the depression area of Dornelor (Vatra Dornei) and the small mountains of Bargaului; to the east - the series of depressions Paltinis, Dragoiasa, Bilbor, Secu separates it from the high mountains of Bistrita and from the Giurgeului mountains (southeast); to the south, the Mures gorge is the limit to the volcanic mountains of Gurghiului; to the west - the hilly foothills of Caliman make the transition to the eastern part of the Transylvanian Plateau.