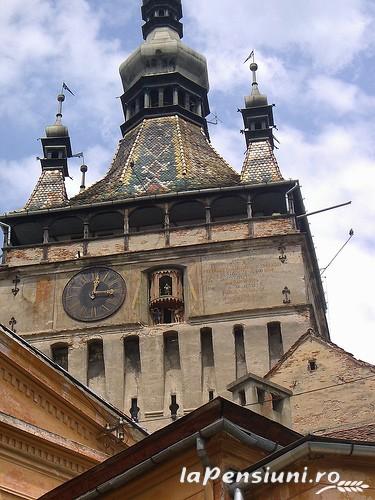 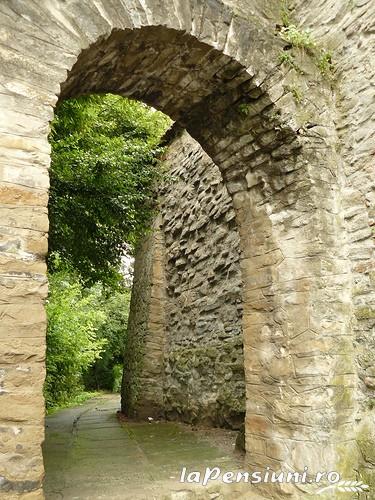 
It is a symbol of the city's most famous and most imposing tower of Sighisoara. Originally called Gate Tower, due to its location next to the second gateway to the city, since the XIII century, was known as current. In 1604 it was equipped with a clock whose mechanism was made of wood, because, 44 years later, in 1648, led by Jhonn Krischel watchmakers to replace him with one of metal.

Besides the two quadrants, facing the two plates of the city, Jhonn Krischel has placed two wooden statues groups operated by the clock mechanism.

Although he burned in the fire in April 1676, because of its importance, the clock tower was rebuilt in the next year.

In addition to defensive role that it fulfilled the tower also serve as ammunition storage, archival and treasury of the city. The most important function of his was still the headquarters of the city council, which met on the first floor until 1556. From 1899 clock tower is transformed into a museum that we know today.


A wooden gallery around the tower to the last floor. From here, rang in the holidays songs sung by the orchestra orasului.Tot here, the guard tower repeat the drum beats of the number of hours elapsed, the clock first announced, proving that it is awake and watching.

Now at this level lies in front of the visitor a view that will remain forever etched in your mind an image happy.


Sighisoara has existed since the third century BC, a Dacian fortress called Sandoval. This is evidenced by the numerous weapons, domestic pottery discovered here. Over ancient Dacian settlement from Sighisoara Romans built another city in century CE The place was well chosen because as a kind of crossroads of roads in central Transylvania. Identification was made on the plateau called "Podmoale" in the vicinity of the town today.