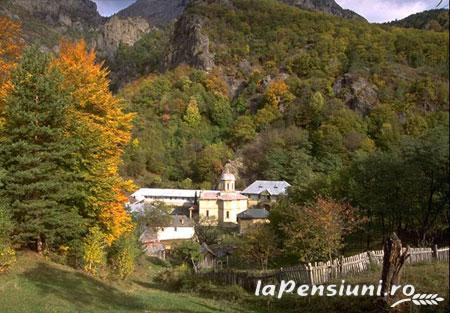 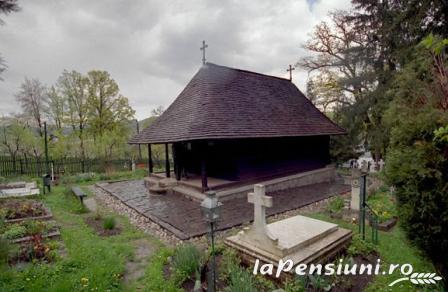 Arnota Monastery, built by Matei Basarab in 1633, is a beautiful monastery of nuns, which, through painting, architecture and sculpture can be considered one of the most representative historical monuments and religious art in the country.

Bistrita Monastery, founded by the boyars Craiovesti Bistrita Monastery, dedicated to "Assumption Domunului" dating from around 1490.
Hurezi Monastery is located in the northern part of Valcea county, on the national road DN 67 Ramnicu Valcea, Targu Jiu, in the foothills of the skull is considered as the most representative architectural complex, defining "Brancoveanu style."
Polovragi monastery is situated at the foot of stone on the road Polovragi Tg. Jiu - Rm near Cave and Gorge Oltetului Polovragi.
Govora monastery is situated 6 km from Baile Govora, near the village Mihaiesti. It is a monastery of nuns dedicated to the "Assumption."
From a Monastery Wood is situated 12 km north of the city Babeni in common Francesti. Tradition says that the place had been built in the sixteenth century wood using a single oak.
Stanisoara Monastery is located in Calimanesti village at the foot of the mountain Cozia. The entire monastic settlement is in a quiet natural setting, surrounded by natural beauty tempting.
Polovragi Cave has a length (so far investigated) 11 km. Walked tourist trail is approx. 800 m. This route is partially illuminated.
Muierii Mesozoic limestone was carved on the southern edge of Parang Mountains, the Yellow River. With a rich history, ancient cave sheltered during the war, when men went to fight, many children and women, where it gets its name. This is the first electrified cave in Romania.
(Translated by Google Translate)