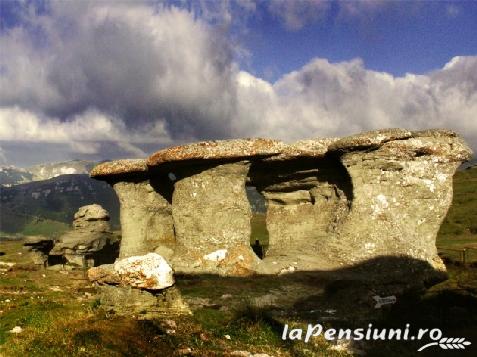 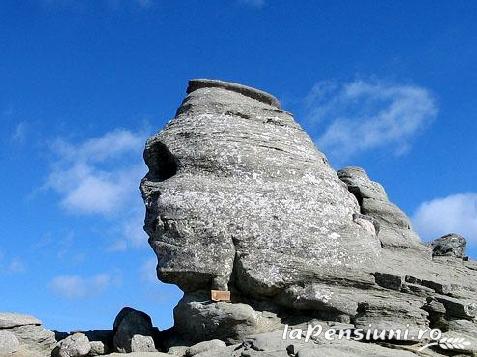 At an altitude of 2,291 m, on Mount Caraiman, a cross was placed, in honor of the heroes of the nation fallen in World War I. The cross was built between 1926-1928 and is also known as the " Caraiman Cross ".

The historic monument is unique in Europe, notably by the altitude it is located, but also by the impressive height of 28 m.
The construction works were initiated at the initiative of the Queen Maria and King Ferdinand I of Romania, in the memory of the heroes killed in wartime war heroes in the battles against the Central Powers.
Prior to the installation of the communist regime, the cross was illuminated only on the night of the Holy Mary and the Ascension Day, when it was the Day of Heroes.
At present, the Caraiman Cross is illuminated by 300 bulbs, being visible from the town of Busteni, which is at the base of the mountain and not only.

Babele - a monument of nature, formed over time due to rain and erosion of the wind. The mountain ridge with a maximum altitude of 2,292 m (VfBaba Mare) is made up of conglomerates and sandstone.
It is an important tourist destination from which you can go to Vf.Omu (2,505 m), to the Ialomita springs and cave, to the Cross on the Caraiman massif, to the churches Piatra Arsa and Varful cu Dor etc.


The Sphinx - a monument of nature, formed over time due to rain and erosion of the wind.
The giant, lonely rock is made up of conglomerates.