Pensiunea Magura - accommodation in Fagaras and nearby, Transfagarasan 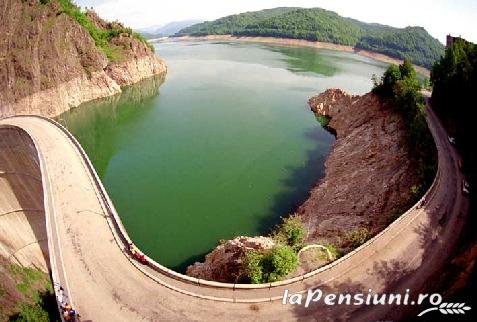 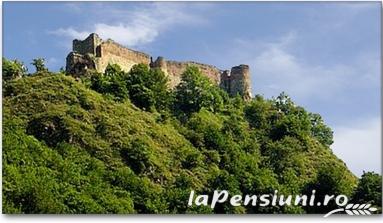 Poienari-city located on the mountain spur Caprisoara at an altitude of 850 meters, protected by steep slopes, city guards Poienari centuries into the Arges gorge.
Following archaeological research has determined that it was built in the late thirteenth century, before the reign of Vlad the Impaler and made part of a strategic plan to defend the northern Wallachian border, along with other cities: Lotru, Stoenesti, etc. . Vlad Tepes, called Dracula, the city rebuilt and strengthened.
The defense walls are 2-3 meters thick. Entry into the city was made under the stone tower on a bridge. Once up this bridge, the city became completely isolated.
Access to the city is climbing the 1,480 steps in a beech forest. Reached the top of the mountain, guests will enjoy a city view impressive, which will not be forgotten.

Vidraru-Lake is a reservoir created in 1965 the dam Vidraru in Arges, Arges River for electricity production.

Vidraru dam construction lasted five and a half years beginning in 1960. For this achievement, it took 42 km of tunnel were excavated 1.768 million m3 of rock, of which about 1 million underground were 930,000 m3 of concrete poured in the 400,000 m3 underground and also were installed 6300 tons of electromechanical equipment.

On completion it was located, measured in height, about 8th place in Europe and ranks 20th in the world.