Cabana Hanul Voievozilor - accommodation in Fagaras and nearby, Transfagarasan 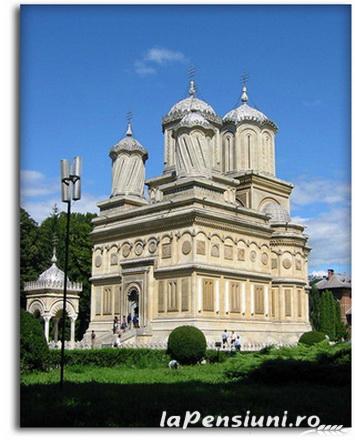 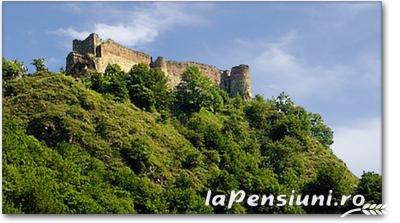 Fortress Poienari sitting in C?pri?oara mountain spur at an altitude of 850 meters, protected by steep slopes, city guards Poienari centuries into Arges gorge.
Following archaeological research has determined that it was built in the late thirteenth century, before the reign of Vlad the Impaler and made part of a strategic plan for defense of the northern Wallachian border, along with other cities: Citizens Lotru, Stoene?ti , ETC. Vlad Tepes, called Dracula, the city rebuilt and strengthened.
Defense walls are 2-3 meters thick. Entering the fortress was under the stone tower on a bridge. Once up this bridge, the city became completely isolated.
Access to the city is climbing the 1,480 steps in a beech forest. Reaching the top of the mountain, guests will enjoy a city view impressive, which will not be forgotten.

Curtea de Arges Monastery, built of stone Albesti, with the founder on Neagoe (1512 - 1521) is one of the most famous historical monuments in Romania. His fame is linked to the legend of Master Manole is known worldwide. Princely Church, built by Basarab family in the XIV century, is a classic Byzantine church, a monument of Romanian medieval art and architecture. Here are frescoes from different periods of time, but most valuable are those dates are during Vladislav I Vlaicu rulers and Radu I.

The dam and lake-Lake Vidraru accumulation was founded in 1966 Vidraru and is located on the river, an area 28 km long. Located between the mountains and Ghitu forehead, the lake collects rivers Capra, Buda and several direct tributaries: River Lady, topology, Valea lui Stan and clear.
Vidraru Dam was at the time of inauguration, the fifth in Europe and ninth in the world among similar buildings. Dam construction lasted five and a half years and relies on the slopes of the mountains and Vidraru Pleasa. Maximum water depth is 155 m high dam near 166 m.