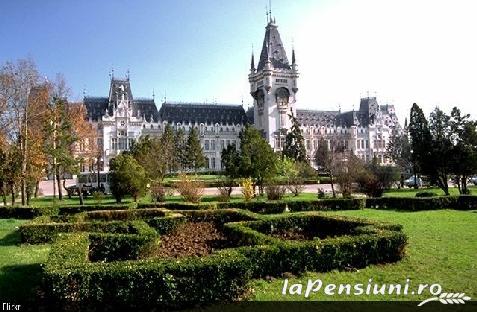 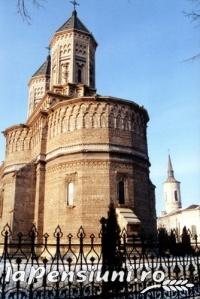 Metropolitan of Moldavia and Bucovina - Iasi Cathedral is a monumental building, the rectangular, four towers marked the corners decrosate. Architectural style is inspired by the late Italian Renaissance forms. Decorative elements, both inside and outside, are dominated by Baroque.
In 1889 was brought from the Three Holy Hierarchs church, the coffin with the relics Cuvioasei wife, protector of Moldavia.

National Theatre 'Vasile Alecsandri' - built in Iasi, on the old halls, between 1894 and 1896, the National Theatre building is considered to be the oldest and most beautiful place of its kind in the country.
National Theatre building is a real architectural jewel shelters true monuments of art: curtain painted in 1896 by master Viennese M. Lenz and finished by one of the disciples, the center presents an allegory of life, with the three ages, and right allegory Union Romanian principalities (Moldavia, Transylvania and Romanian Country) Iron Curtain, painted by Al. Goltz, with ornamental motifs arranged symmetrically separated from the rest of the scene sealed room, ceiling painted by Al. Goltz, pastel, allegories are heavenly, as illustrated with nymphs and angels and framed in rococo stucco, Venetian crystal chandeliers with 109 bulbs.
Today the building hosts the Romanian Opera.