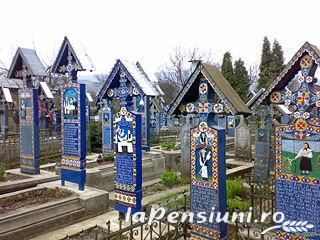 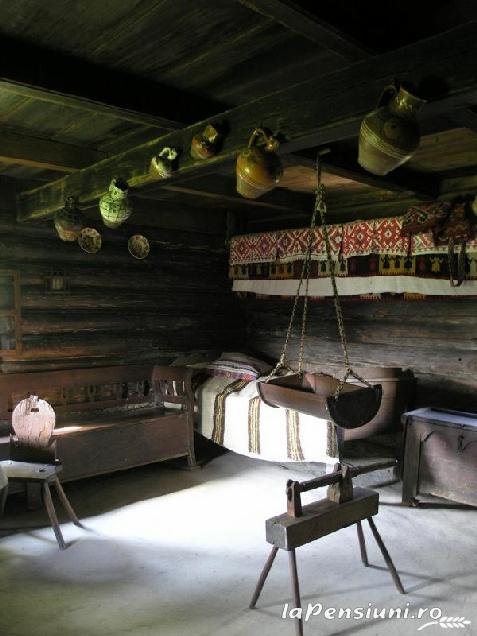 Merry Cemetery is a cemetery in Sapanta, Maramures County, famous for tombs crosses colorful naive paintings representing scenes from the life and occupation of persons buried. In some crosses, there are even lyrics that are mentioned, often humorous tone, the persons concerned.

The novelty of this cemetery is the difference to most cultures of the peoples, who consider death as a very solemn event. Sometimes the special character of this cemetery was put in touch with the culture of the Dacians, whose philosophy was based on consideration immortality and that death was a cause for joy, that person reaching into another life better.

The cemetery has its origin in some crosses sculpted by Ioan Stan Patras. Thus, in 1935, carved the first epitaph Patras and from 1960 onwards, the whole cemetery was populated with about 800 such crosses, carved oak, making it an open air museum of nature and a unique tourist attraction.

Located at the entrance of the town of Sighet on the road from Baia Mare, Maramures Village Museum to join in 1981, the Ethnographic Museum of Maramures as an outdoor section.

The reserve was established as a peasant architectural monuments. For homes on display in a museum carved wood was used by craftsmen in the area, and illustrates the typical slave housing, Jewish, Hungarian, German and Romanian in the 17th and 18th centuries. They are kept in very good condition both inside and outside, with original reasons for the doors and inscriptions in Cyrillic and Arabic.