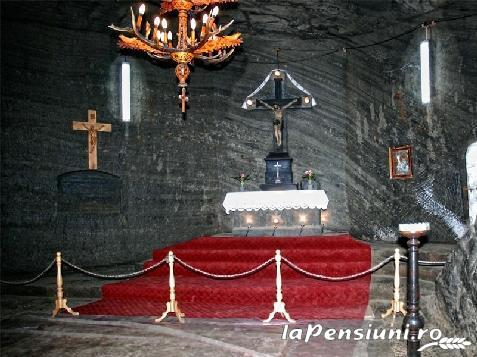 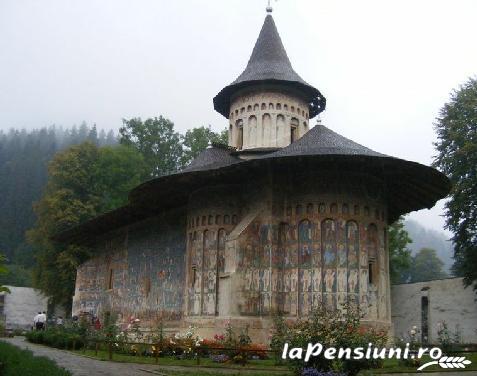 Voronet is situated in the village of the same name, 36 km from Suceava and only 4 km from the center of Gura Humorului. It is one of the most valuable foundations of Stephen the Great. The church was built in 1488 in only four and a half months which is a record for that time.
Legend "origin" of the church forever unites two great personalities in our national destiny: the founder of the monastery Stefan the Great and Reverend Father Daniel, the first abbot of the monastery, one of the greatest saints on earth who offspring Moldova, hermit and confessor vestit.O holy candle lit tomb of St. Daniel the Hermit watching where he monastery community blessing for the services of: morning, afternoon and midnight.

Cacica ball found: a Roman Catholic chapel - St. Varvara, another chapel - Orthodox, located at a depth of 35 m, dug directly into salt and recently, the walls were decorated with reliefs of salt religious theme but an artificial lake salty, light using reflectors.

Lucina farm is one of two horses in Suceava county where they are bred race horses, race horses here are bred Guzuls. Stud existed since 1788.

Probota Monastery (Monastery Pobre after the old name) is an Orthodox monastery in Romania, built in 1530 in the village of Probota (which currently belongs Dolhasca city of Suceava) by Petru Rares. The monastery church is dedicated to St. Nicholas.

Forest Sl?tioara was declared a nature reserve in 1941. Since then, the trees die standing, decompose and provide food for future generations. In Romania, there are no such coniferous forests, which is the second in Europe after Germany.